With the last major extinction, many of the niches that were previously held by large reptiles were now open and free for the taking. The mammals, animals that allocated resources toward maintaining a consistent body temperature rather than physical size, were able to survive the harsh conditions by burrowing underground. Mammals at this time were fairly small animals that looked similar to today’s rodents.

After enough time passed for the atmosphere and plants to recover from the last mass extinction, the mammals were able to leave their holes and start exploring. They quickly spread out, diversified, and filled up those newly open niches.

We’re only going to follow one of those lines of diversification and adaptation: ours! The organisms that found homes in the trees adapted fingers for grasping as well as a digit that went in the other direction, we call this an opposable thumb. Things were good for our ancestors since they were very well adapted for life in the trees, safe from predators below and surrounded by plenty of food.

The easy times in the trees didn’t last long. While we were enjoying the lush forests of Africa, tectonic movement was squeezing the small Panama plate between the expanding Atlantic ocean and Pacific plate. The pressure of surrounding plates raised the continental crust above sea level and a land bridge formed between North and South America; we call this raised land the isthmus of Panama. With the Americas now joined, the Atlantic and Pacific oceans were cut off from each other.

The merging of these continents caused the ocean currents to reroute, pumping warm water from the Caribbean Sea north toward Europe. That warm water pushed the cold water out of the way so it headed south along the western border of Africa. The cold water moved quickly and therefore the sun had less time to evaporate the water as it flowed by. With the sun evaporating less water, the water would stay in the ocean rather than form clouds and fall as rain over the land. This caused what we call a drought.

As you probably know, living things need water and dense forests need a lot of water. Without steady rainfall, the African rainforests dried up, killing many trees and turning the land into a savanna. Grasses need less water than trees so they took over the niche.

With less trees, our tree-dwelling ancestors had a lot more competition for homes and food. Some individuals stayed and fought, others weren’t suited to compete and died. A few of our ancestors decided to try and find food elsewhere, and that required climbing down from the safety of the trees.

The larger individuals with powerful hind legs, allowing them to stand and walk longer distances, were better suited to survive on the ground. Our ancestors were now in constant peril of the predators they used to safely watch from above. The stakes for natural selection were high; only the best adapted for walking and running on two legs survived.

Our ancestors weren’t at a disadvantage for long. Sure, they didn’t have adapted weapons like sharp teeth or claws, but they did have two free limbs that could hold and carry objects. During this time, many adaptations created many unique species along the way. I’ll refer to all our ancestors after leaving the trees as part of the homo Line since homo sapiens aren’t terribly different than homo erectus or homo habilis.

Given enough time and the necessity for protection, our ancestors were able to use their cognitive adaptation to use objects, like sticks and rocks and bones, as weapons or tools.

These were the first engineers and artists, creating for their survival. Finding a new use for a rock or stick might not sound like the most impressive feat, but we were the very first ones to figure this out! The use of fire gave our ancestors a great way to make even predators fear them; we were climbing higher in the food web.

Not only did our ancestors have the ability to think up new purposes for tools, they could also socialize and pair signals with meaning. This is not to say that they immediately created a language, but they did develop an effective form of communication that could aid in hunting. Remember, nature is a competitive game and all the players have to eat. With their weapons and their communicative skills, our ancestors became very capable group hunters. They could now flank their prey to surprise it giving them a better chance of a successful hunt. 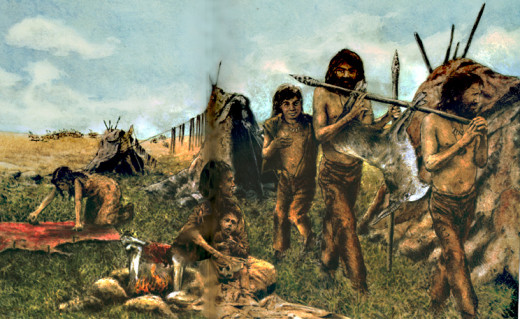 Our ancestors were very good at using things they found in their environment to their advantage. They could use the mud and rocks on the ground to build shelters. They could use the skins of their prey to create clothes and bags for gathering. Eventually, they were able to figure out the part of the plant that creates more plants, the seeds, and spread them near their shelters. This was the beginning of agriculture and the next step into a world greater than any organism could have ever dreamed.